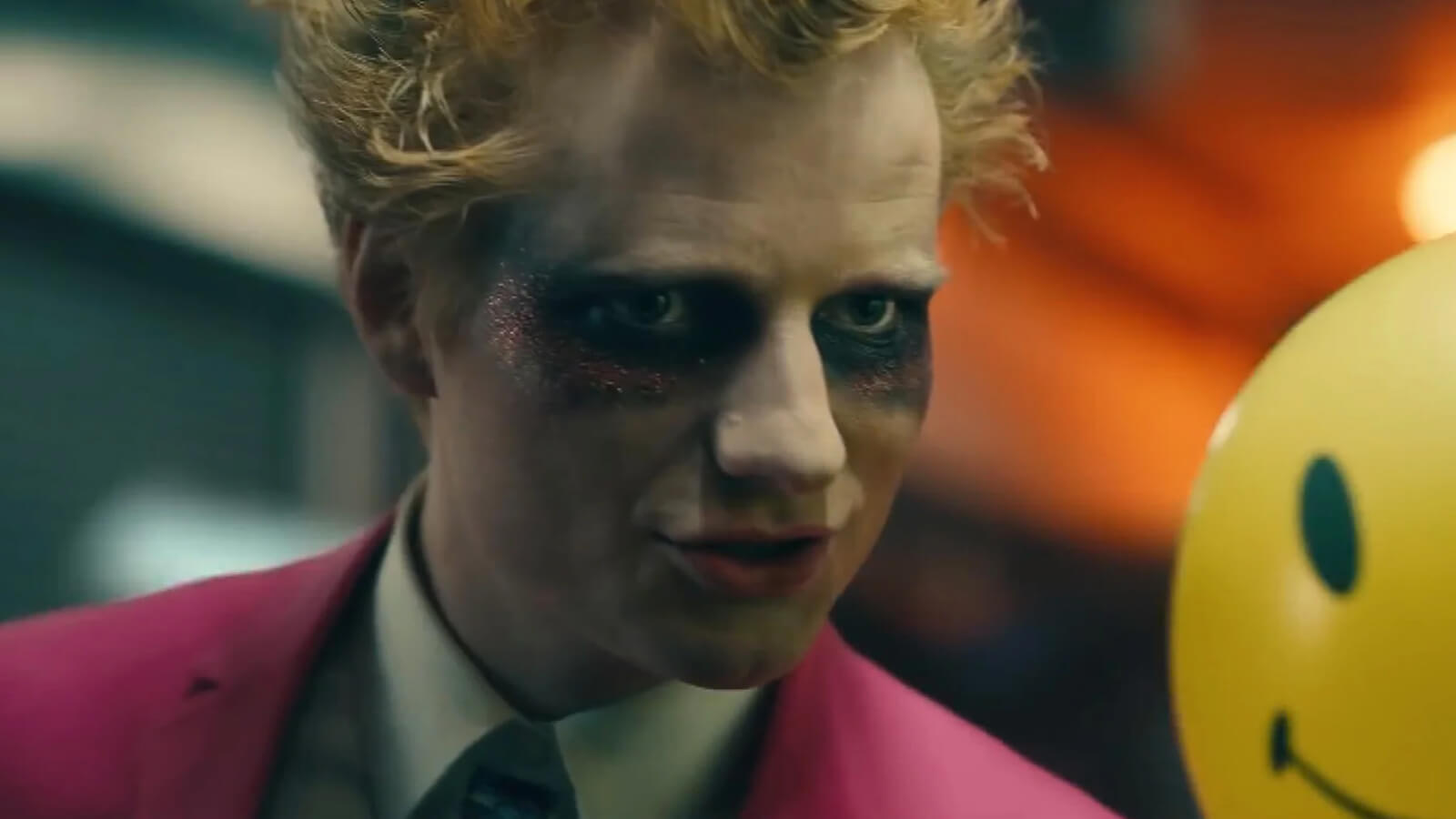 Bad Habits is singer-songwriter Ed Sheeran’s 12th UK Number 1, wracking up over 200m plays on Spotify and more than 100 million YouTube plays within its first few weeks of release.

In this article, we shakedown the song and look at some of the tricks and concepts used by one of the world’s most successful songwriters, and share ideas for how you can apply them to your own songs.

In the world of pop music, there are fewer stronger songwriting tools than repetition. Bad Habits relies on repetition right from the start, with a single round of the chorus hook “Whoo whoo whoo”.

It’s especially well used here as the first line of the verse “Everytime you come around I can’t say no” is low in pitch, and doesn’t have a huge amount of impact as a song start. 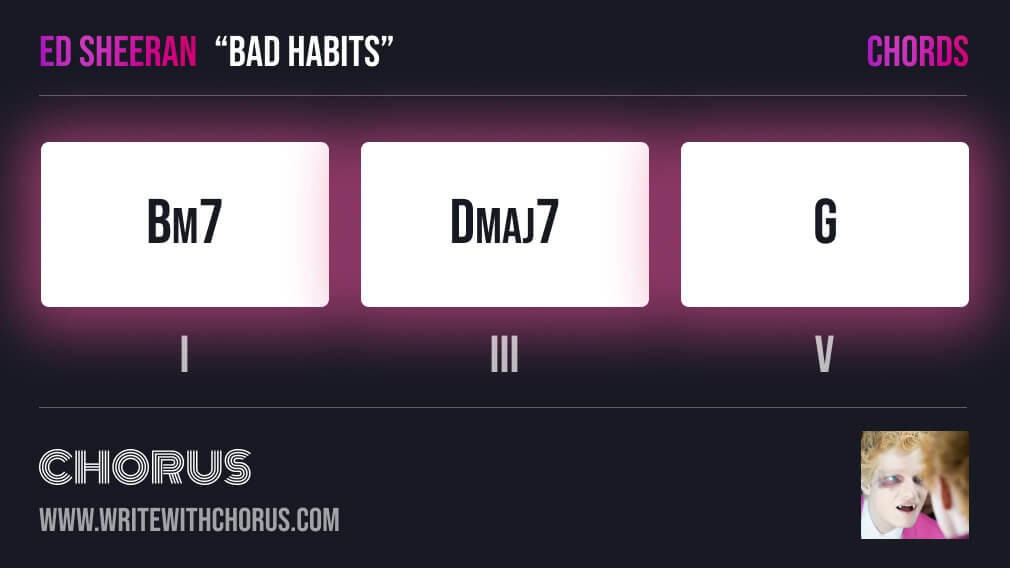 There are two really clever concepts at work here to keep that simple chord progression exciting.  Firstly the chorus is split into two blocks of 8 bars, with further 8 bars of post chorus.

To cue the 2nd block of 8 bars and to make it sound fresh the bass passes through VI (G) and IV (E). It’s the first time we hear a change in the chord structure and it sounds like something new is happening. Its a tiny change, with big results. (In the bridge the  F#minor 5 chord is debuted for a similar reason.)

Secondly the first 8 bars of chorus are stripped back to a single note bass. The harmony (the other notes in the chords) is absent. There’s three reasons why this works so well:

a) In a song where the verse and chorus combinations are essentially the same, the removal of harmony differentiates the chorus from the verse.

c) As the chorus is split into 3, 8 bar sections, the drop in the first 8 bars means the 2nd 8 bars can come back in strong. The change means the listener is still interested by the end of the post chorus. When Ed delivers the same hook he started the song with, its a hook you already know.

The lyric of Bad Habits also has some stand-out moments.

In a song about addiction, it is packed with emotive and powerful language. “I can’t say no” – “I let you take control” – “late nights endin’ alone” – “I got nothing left to use, or lose, or do” – “Looking for a way out but I can’t escape”

Typing the word “addiction” into Triggers in Chorus brings up…

Entering the phrase “bad habits” with Genius in Chorus will bring up…. 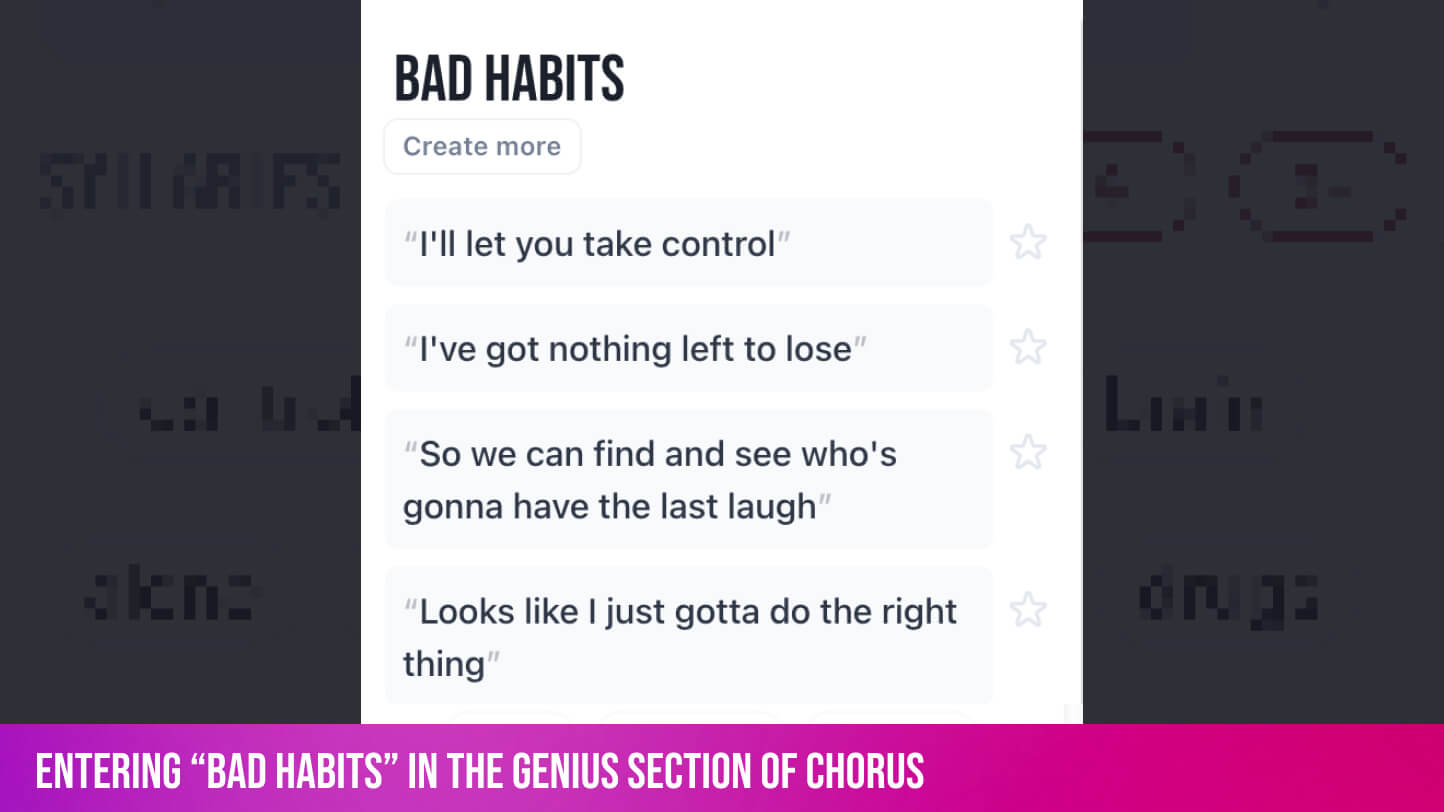 Another masterstroke employed to make the chorus as catchy and memorable is the book ending of each chorus section with the title of the song with the “My bad habits lead to…” lines.

“My bad habits lead to late nights, endin’ alone
Conversations with a stranger I barely know
Swearin’ this will be the last, but it probably won’t
I got nothin’ left to lose, or use, or do

My bad habits lead to wide eyes starin’ at space
And I know I’ll lose control of the things that I say
Yeah, I was lookin’ for a way out, now I can’t escape
Nothin’ happens after two, it’s truе, it’s true

My bad habits lead to you”

The only time “My bad habits lead to you” isn’t used is at the end of the first 8 bar chorus section.

This is almost certainly intentional. Its absence keeps the chorus rolling so it can move into the next section with energy. In its place is an open-ended “I got nothin’ left to lose, or use, or do” a line that is the antithesis of the song.

What you can learn from Ed Sheeran for your next song 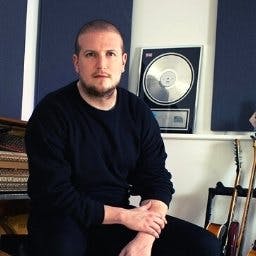 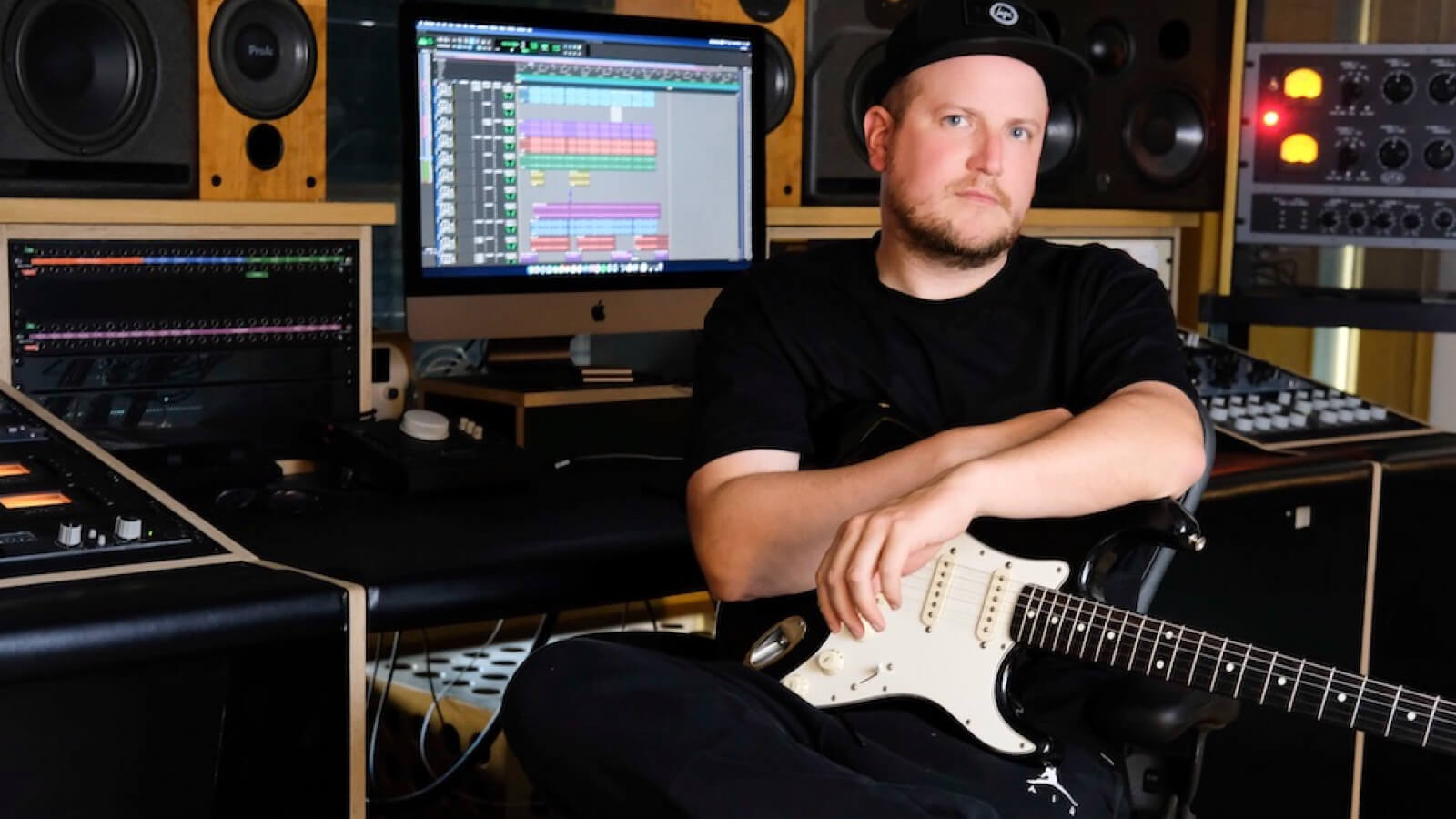 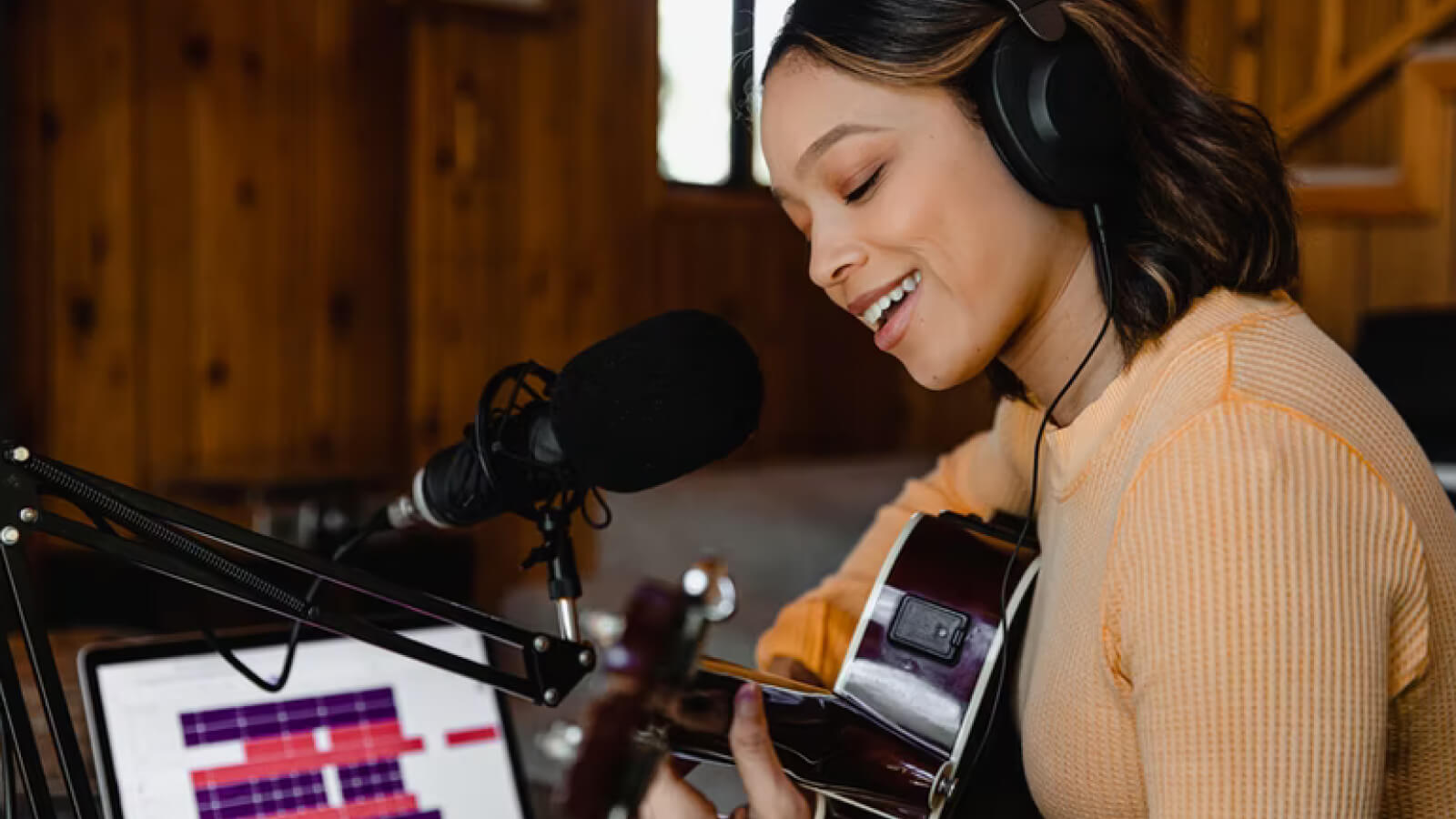